NOTE: Originally posted this back in 2018 on my Steemit blog. Will be posting more here as time goes on. Enjoy!

So as you may or may not know, I sold my business about a month ago to move to Thailand and live the digital nomad lifestyle. I’m not focusing on any one thing as much as I am throwing as much spaghetti to the wall to see what sticks.

Otherwise known as the shotgun method. “Spray and pray.”

I have lots of projects in the works:

But most importantly, I’m trying to build my personal Instagram page up to 100k followers.

Out of all of my projects, this one is the most difficult. And the difficulty lies in the fact that it’s not as straightforward as the other ones.

Marketing for an ICO has clear goals. Writing an article has an obvious outcome. But how are you supposed to make people follow your IG page? What’s the secret sauce there?

Coming from someone who hasn’t used Facebook in years, I have no idea. Which is ironic because this is what I do for a living. But when I manage a page, it’s always based around a certain niche.

Now my problem is that I’m too ADD to say, “Okay, I love this ONE THING and am going to do it for the rest of my life.”

Are you kidding me? I can’t even decide on what to do two days in a row, let alone the rest of my life.

The biggest challenge with creating content for my personal page is simple. My life is not exciting, and yours probably isn’t either

I have pretty much the same routine every day.

If I was one of these jacked fitness models, I’m sure people would love to follow me around all day and watch me type on my computer. Without a shirt. Covered in coconut oil.

But the only thing jacked about me is my… well, nevermind.

And while it’s true, I do need to start spending more time in the gym, that’s not the main problem. My routine is too simple. It’s just not exciting enough yet.

That said, I do know a lot about building IG pages quickly, so I’m trying to find a way to reconcile my boring life with building out my personal page.

I’ve found a few temporary solutions until I manage to get successful enough where I can rent a 6 bedroom villa and populate it with Russian models. First off, I am totally fine with stealing content from other IG pages and pretending like we’re actually friends.

One thing you probably already know about social media is that most of it is fake. Not fake like Jerry Springer fake, but fake like exaggerated fake. Like, you’re not REALLY friends with this person, you were just together for a few hours and decided to take a picture so you could put it on IG and make your friends at home think you’re more popular than they are.

So basically what I do is use IG’s search feature and pop in hashtags that are somewhat relevant to my life. #Patong, #Thailand, #Phuket, #Digitalnomad, #traveler, etc…

If I find any good content, I unabashedly steal that shit and post it on my own page. OBVIOUSLY I credit the OP with a mention and some choice ego-boosting words, but I still steal that shit.

What do they say? Good artists copy – great artists steal.

The good thing about this is that it takes the pressure off of me to get myself into situations that maybe, possibly might lead to a good photo or video. Like I said, until I have super cheese-grater abs or 30 inch biceps, posting pictures of myself/my life is going to be pretty boring. Grant Cardone is famous for saying, “Your [business’s] biggest problem is obscurity.”

In other words, if nobody knows who you are, they’re never going to buy your shit. In my case, I’m not trying to sell anything, I just want to get people to know who I am.

3 times a day is about as much as I can handle while still managing to balance other shit in my life. Once in the morning, afternoon and evening. It might sound like a lot, but the total time it takes me to post does not exceed 30 minutes total.

Because I’m currently living in Thailand, posting so often also helps me because of the time difference between here and America. There’s a 12 hour time gap in between this time zone and New York.

What this means is that when it’s day here, it’s night there. This fucks up my posting schedule because if I post shit during the day, people are sleeping. And I don’t feel like becoming a night person or staying up all night just to get more likes on my pics.

So 3x a day helps to counter that.

The next thing I do is to look for content that I think will do well on IG. This is one of the benefits of stealing content from other people’s pages or the internet in general. You don’t have to come up with the good stuff on your own – you can just hop on Reddit and see what the hottest pics/vids of the day are and repurpose one of those.

What does well on IG, you ask?

If I had to sum it up in a few words, I’d probably say, “Content that is visually appealing and eye-catching.”

A well-known concept in digital marketing is that you only have a split second to capture a user’s attention. The amount of time you have to get them to pay attention to you is so small that they need to want to see what you’re showing them before they even realize that they want it.

You need to appeal to them on a primal level and get their lizard brain engaged in your content.

I make all these jokes about being ripped with big muscles, but they’re not really jokes. If a chick (or even a dude) is scrolling through her feed and sees some guy who looks like he just ate Arnold Schwarzenegger, her brain is going to be like, “hey wait a second, that guy’s hawt, lemme spend a few more seconds here…”

And when it comes to marketing, your whole goal is to buy yourself a few more seconds of the user’s attention.

Copywriters will tell you that each sentence is designed to get the user to read the next sentence.

Phone sales pros will tell you the same thing.

Now, if you’re not a super ripped bro or a surgically enhanced female, don’t fret. You can post viral videos and write a nice little caption that somehow connects it to the theme of your page/brand.

That way, you’re taking advantage of a video/pic that’s PROVEN to capture people’s attention, while at the same time rebranding it with your own message.

Since I go to the beach on a daily basis, I’m a fan of trying to snap a few shots of hotties that I see walking around on the sand. I mean they wear these little thong bikinis… God bless Russia. Here’s a million dollar tip I’m gonna give you for free: videos > pictures in pretty much every way.

Why? I dunno. I personally don’t like watching too many videos because it takes 3-4 minutes of my undivided attention – which means I can’t work on other things.

Normal adults with real jobs don’t spend a lot of time on IG unless they’re working on it professionally. Why? Because they have to fucking work. They can’t be on that shit all day.

That’s your target audience. Okay fine, doesn’t have much to do with videos vs posts, maybe it’s just my theory. Whatever the reason, videos are better. So post them. This happens so rarely on IG I’m almost reluctant to tell you to do this. But do it.

When you post a pic, or video, on IG with a short caption, people will take a few seconds and read it (or not) and then move on.

People think that you need to limit yourself to a few words in your caption. That’s not true. Say what you want.

IG will allow you just over 2000 characters in your post. I am consistently running out of room on posts and have to make them shorter in order to comply with IG’s guidelines.

Since starting this, I’ve been getting a lot of DMs from people telling me that they like my content. While it’s been little more than an ego boost (I only started this whole experiment a few weeks ago), I imagine that when I have 50k followers instead of 5k, it will serve me much better professionally. Oh what’s that? You don’t like using hashtags because it looks spammy? I have two things to say to that:

See the pic below for an idea of what I’m talking about. I’m sure you’ve seen this before. 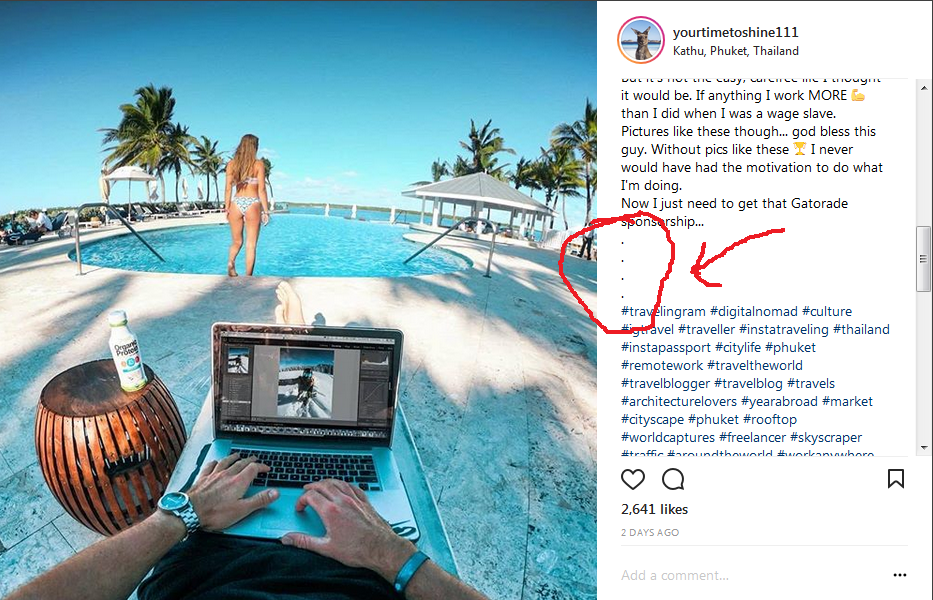 When you use this strategy, it helps to break up the post so that it doesn’t look so spammy. This, combined with a well-thought out caption and a decent image/video (or even a viral one), will make your page pop.

Anyway, those are my tips. Now I’m gonna go to the beach and stare at some Russian booty.

Get your FREE quarantine fitness guide!